From just one rotisserie chicken

In the week before Christmas, I made a quick run to the grocery store for essentials and picked up a rotisserie chicken. It was so nice and warm and as soon as I got home, I tossed a large potato into the microwave to “bake”, sliced zucchini and sauteed it with onion, and pulled out baby carrots. I removed one of the breasts and split it between the two of us along with half of the potato and the veggies. The rest of the chicken went into the refrigerator.

The next day, I used the second breast to make a simple Cobb salad for lunch. Salad greens, cubed chicken, tomatoes, cucumber, cheese, and avocado. Hubby topped his with ranch dressing and I went for my usual balsamic vinaigrette. After lunch I pulled the rest of the meat from the bones and tucked it into the freezer in a zip-top baggie. 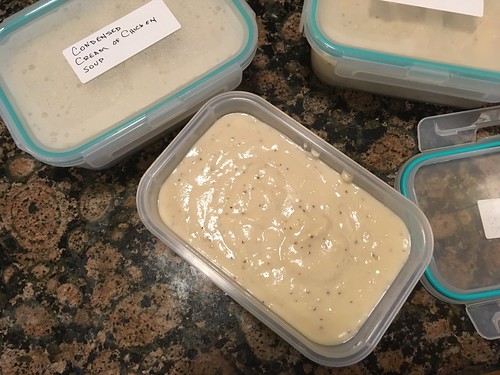 The carcass went into the Instant Pot along with some onion, celery, and carrots to make broth. I ran the carcass through two times, giving me three quarts of broth. Two of the quarts went into the freezer and the last one was used to make condensed cream of chicken soup—or the nearest homemade substitute. I got the equivalent of four cans of soup. I also placed these into the freezer for a later date.

After Christmas, I thawed the reserved chicken meat and used it to make chicken taco filling. The recipe is simple: shredded chicken and salsa. I set aside ⅓ of the meat for later and hubby and I had soft chicken tacos for dinner. The next day, I thawed one of those quarts of chicken broth and used it and the reserved taco meat to make chicken tortilla soup. Another easy recipe: broth, chicken, canned tomatoes, and green chilies. The recipe called for beans, but we didn't really want them and it would have made 'way too much soup. Topped the soup with a little bit of shredded cheddar cheese and that was the fourth meal from the one chicken.

I still have a quart of broth to be used for soup or other recipes and those “cans” of condensed soup to use for casseroles.