I'm pretty smug today, having scored a 3-for-3 yesterday. It's rare that we consume all three meals at home. I did explain to hubby that I'd really like to reduce the number of times that we go to a restaurant, but I'm not sure he's really bought into it. Just last night as I got up to put supper on, he asked did I want to go out. 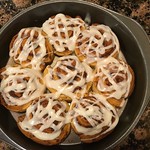 Breakfast was simple. I opened a can of cinnamon rolls and popped them into the oven. Drizzled the provided icing on them as they came out. That plus some fruit—grapes, mandarin oranges, and bananas—constituted breakfast.

I had to take a pass on supper. A late afternoon dental appointment ran extra long when he discovered that one of my teeth was cracked and needed to be crowned. Getting home around 7pm, I just didn't have time to cook supper, so we grabbed fast food. Since there are 93 meals in January and the challenge is #cook90, there are 3 “free” meals built into the challenge. I had hoped to save those up for later in the month.

I don't want to confess how long the can of cinnamon rolls had been in the refrigerator. Suffice to say that they were significantly past the “best by” date. They turned out fine, though. When I sorted through the pantry over the weekend, I had noticed several cans of tuna, so I decided to make tuna salad sandwiches for lunch. Mistakenly, I didn't read the labels well. They were all chunk chicken breast, not tuna, so I made chicken salad instead. </p>
Tags: #cook90, #pantrychallengei, challenges, chicken, cooking, food
Subscribe

Posts from This Journal “chicken” Tag