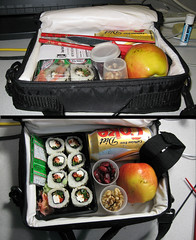 Motivated by the Bento lunches described in many blogs and whose photos are shared on Flickr, I packed my lunch today. I don't have a "bento box", but I did fit stuff into my insulated lunch box and took off for the office.

"Lunch" is actually a misnomer since this meal is intended to be eaten around 6pm. I didn't go into the office until 2 this afternoon—having worked at home for a couple of hours and then getting my noon meal at the local diner. I won't head home until 8pm at the earliest, which is why I decided to tote my meal instead of buying fast food or waiting until I got home.

The top photo shows the lunchbox immediately after opening it. I forgot the two paper towels I had folded, but otherwise it's a complete meal. Opening containers, I then took a picture of my lunch—"Bagel roll" sushi purchased at the Atlanta airport last night, dried cranberries, walnuts, apple, and a can of Diet Coke. With chopsticks for the sushi and a small paring knife for the apple, there's not much clean-up needed when I get home.