Again, I skipped breakfast. At this rate, #cook90 (eating 90 meals at home) is going to end in mid-February or I'm going to have to rename it #cook65 if I want to finish by the end of January.

Lunch was very low key. I warmed up a frozen burrito and a couple of frozen taquitos and ate them with the last of a bottle of salsa. I had to redeem myself at supper. I cooked bratwurst with onions in 1/2 a bottle of beer. Served with rice, left-over green beans, and sauerkraut. For dessert, we ate applesauce—mine was topped with a dash of cinnamon, ginger, and cloves. (Yes, pumpkin pie spice.) 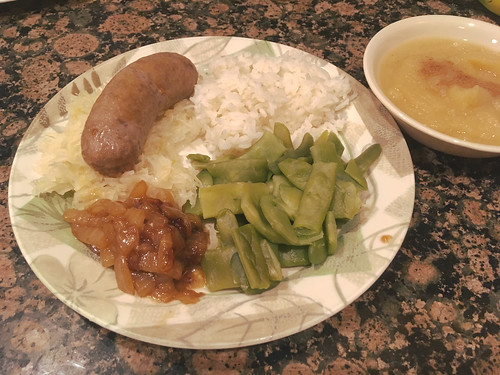 Although I have a pretty good inventory of the freezers, I still haven't taken one of the pantries themselves. That's on the “to-do” list for the weekend. In the meantime, here are pictures of the two pantries. 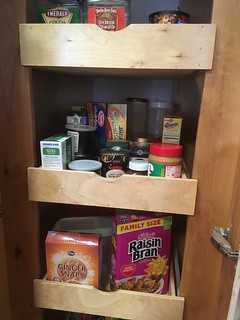 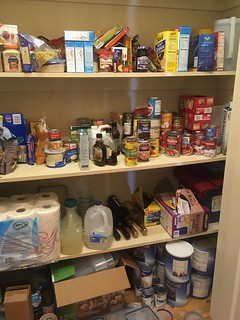 The photo on the left is the small pantry in my kitchen. We keep stuff here that is needed almost every day such as cereals and snacks. The bottom shelf (which isn't in the photo) holds all the boxes of plastic wrap, baggies, foil, and parchment paper.

On the right is the big pantry next to the garage entrance. It's deep storage for non-perishables canned items, crackers, pasta, and boxed mixes. We also keep the kitchen “supplies” here such as paper towels and trash bags. The rest of the space holds excess plastic and glass storage containers, pitchers, and a couple of bottles of wine. Down on the floor on the far right are the remnants of the Y2K emergency foods gifted us by friends.

When Steven's father died this fall, we emptied his freezer and pantry, bringing everything that was useful over to our house. I drew from this food for lunch and supper today. I ate the last of the freezer burritos and taquitos for my lunch. And supper made use of one beer and the applesauce from his apartment.

Also, so far this challenge, I've had to dispose of two things: a can of tuna whose “best by:” date was back in 2014 and ½ a bottle of olive oil that just tasted a bit off. I think I'm going to toss some frozen turkey thigh meat whose age I don't really know.