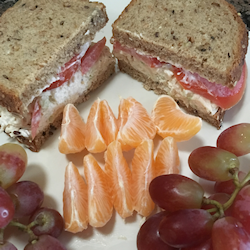 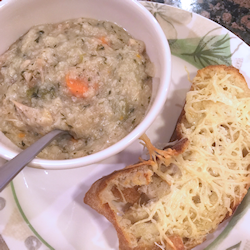 Although I had intended to cook eggs for breakfast today, instead, I stayed in the bed reading. So my first meal of the day was lunch. Having made a huge bowl of chicken salad earlier in the week, we needed to finish it off. (I really hate having to throw away uneaten/spoiled food.) Our lunches were simple: chicken salad sandwiches, fresh grapes, and mandarin oranges. When I eat in the cafeteria at a customer location, my “go-to” lunch is a chicken salad sandwich or wrap with nothing more than mayonnaise and tomatoes. And that's what I fixed for myself today.

Although I had planned to cook a big pot of Leek-y Potato soup, I realized that I needed to NOT cook something new but eat some of the dishes sitting in the freezer. So, I grabbed a container labeled “Zuppa Toscano” and a loaf of sour dough bread. Well, the Zuppa Toscano wasn't—it was instead Turkey Congee. That just goes to show that I should have been more diligent to label the food at the time I put it into the freezer and not rely on recognizing what it is later. I warmed the entire loaf of sour dough bread in the oven, then sliced it and created cheesy bread to go with the congee. The Asians have it right—congee is definitely comfort food. Wish I knew what recipe I had used when I originally cooked it.

Yep, the two items I took from the freezer—the congee and sour dough bread—were all that I drew from deep storage. I take that back. I had also taken the beef ribs from our Christmas Day standing rib roast and run them through the Instant Pot for a couple of hours with lots of water, making some beef broth/stock. I had thought to use it to make soup, but since I decided not to make soup, I'll have to freeze it for later on. And, it is unfortunate, but I'm going to have to go to the grocery in the next couple of days since we're almost out of bread and I have no flour or yeast to bake my own. There are a couple of other small items I'm thinking of such as tomato paste that would make it a lot easier to make good use of stuff that's in the freezer. (Really? Since when don't I have a can or two of tomato paste on hand?)