When we were cleaning out my father-in-laws apartment, I brought all the food that was fit to eat to my house. I just put his freezer stuff into my deep freeze without writing down what it was. Even though I had a pretty good inventory of the contents prior to adding his food, I sometimes find a surprise. And that's what happened over the weekend. In a box of freezer waffles, I found a small stack of pancakes and a sausage, egg, and cheese biscuit. This morning, I toasted the biscuit and ate it for my breakfast with a mandarin orange. I didn't even bother to take a picture of my breakfast. Probably doesn't constitute “cooking”, but it does meet my goals of eating all my meals at home and drawing from food on hand. 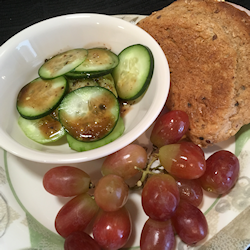 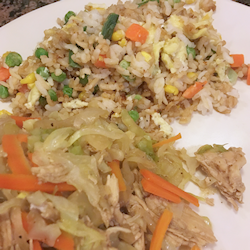 As is typical for lunches, this was a simple menu with very little prep required. We had ham and cheese sandwiches with fresh grapes. I added a small dish of sliced cucumbers topped with balsamic dressing. Steven passed on the cucumbers. For supper, I went all out when it came to cooking. Our main dish was deconstructed egg rolls, based on the recipe for Instant Pot Egg Roll Bowls which I found online. Instead of ground meat, I shredded the extra chicken breast that I had steamed last night. And, I substituted fresh cabbage, carrot, and onion for the bag of pre-shredded cole slaw mix. It came out yummy and Steven says he wouldn't mind a repeat of this some time. I served it with a simple fried rice.

For this month's #pantrychallenge, of course my breakfast biscuit came from the freezer, as did the chicken in the egg roll. I used ½ cup of frozen mixed vegetables in the fried rice which was made from left-over rice. The egg roll dish used up the last of a head of cabbage which was bought before Christmas.

Things at work have started picking up. That plus the time it takes to prepare a meal means that I'm not reading nearly as much as I regularly would. In the past, I would use the time riding to and from the restaurant to read a chapter or two. But since we're not eating out, I don't have that opportunity to read. So yesterday evening, instead of working on blog posts, I simply grabbed my Kindle and turned myself over to solving a mystery with Constable Evans in Llanfair, Wales. 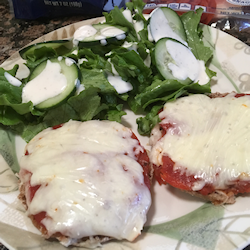 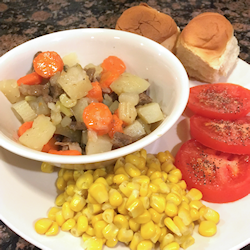 No breakfast. I simply couldn't be bothered to eat anything when I first got up, and by the time I was thinking about eating, it was too close to lunch time. For lunch, I made mini pizzas using English muffins as the crust. I simmered left-over spaghetti sauce until it was extremely thick, then spread it on the English muffin halves and topped with pepperoni and shredded Mozzarella cheese. I made a simple salad with green leaf lettuce and sliced cucumber topped with ranch dressing. I'm still on task with my #cook90 challenge, with the exception of skipping breakfast most of the time.

Supper tonight was a simple beef “stew” made with potato, carrots, onion, and celery from this week's Bountiful Baskets distribution. After peeling and dicing the vegetables, I cut up some leftover slices of roast beef and combined everything in the Instant Pot with about one cup of beef broth. After ten minutes under pressure, I opened the Instant Pot and thickened the sauce with a corn starch slurry. Served the stew with corn kernels, some rolls also from the freezer, and fresh sliced tomatoes.

When it comes to the #pantrychallenge, lunch mostly finished off the box of English muffins that has been living in my refrigerator for a month or so. And, making pizza kept me from having to throw out ½ of a jar of spaghetti sauce left over from an earlier meal. The cheese was an unopened package that I had bought before Thanksgiving. The beef for tonight's supper came from two leftover slices of roast beef that I had stored in the freezer. And the Hawaiian rolls were leftover from Thanksgiving. I took four of them out of the freezer and left four for another meal.