Place chicken in crockpot. Cook on high for one hour. Reduce heat to low and cook for 2 more hours.

Note that other than removing the giblets from the bird's cavity, there was no other prep. I didn't add any seasonings at all, though if I'd had some celery on hand, I'd have thrown in several stalks. This yielded not only the cooked meat, but over a pint of chicken broth to use later.

Supper Tuesday night was the roasted chicken served with black-eyed peas, corn, and salad. The three of us ate one breast half and one thigh. I pulled all the meat off the bones and stored it in the refrigerator for later.

Tonight, I cubed all the remaining dark meat and the wings and made curry from it. Served it with rice and baby carrots.

In large skillet, saute onion and peppers in 2 Tbsp. olive oil until very soft. Add green peas (frozen is fine) and stir until warmed. Remove vegetables to a bowl. Add remaining 2 Tbsp. olive oil to skillet; stir in flour, salt and curry powder. Cook until bubbling. Add water and stir until smooth and mixture begins to thicken. Add chicken; cook until warmed through, then add vegetables back to the mixture and cook briefly. 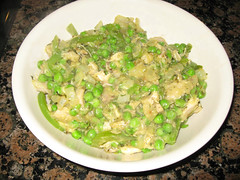 So that leaves the third appearance of the chicken—which will be chicken salad in lunch tomorrow or Friday.