I'm constantly telling myself that we need to eat at home more and stop going to restaurants so often. And yet, I'm not very disciplined and most of the time I have no meals planned in advance. Without a plan, I'll suddenly realize that it's meal time and I don't have anything thawed and I'm hungry and don't want to try to pull something together at the last minute. So out we head to a restaurant. And it's not because we don't have food in the house to eat. Both of the indoor freezer drawers are jam full and the deep freeze in the garage is at least ¾ full.

Come to January and two complimentary challenges—#cook90 and #pantrychallenge—have popped up on the Internet and I'm going to play along. They should give me enough motivation and “support” to carry through the month.

So what are these challenges?

According to the folks at Epicurious, COOK90 is “a month-long cooking challenge. People who take the challenge cook everything they eat, all month long—every breakfast, every lunch, and every dinner.” There's a group at Facebook and the hashtag on Instagram, providing a community of people who are participating in the challenge. I'll post my Day 1 meals, including photos, in a little while. 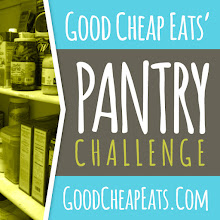 Twice a year, Jessica over at Good, Cheap Eats hosts a Pantry Challenge. As she describes it, “A pantry challenge is a focused time when you use up what you have before buying more food.” What you have can be in the pantry (duh!), the freezer, or even the refrigerator. Most of the participants pledge to draw from their stored food instead of shopping—except for dairy and produce. I'm going to also purchase staples that we run out of such as flour or tea bags. Each day, however, I'm going to make note of just what food we're eating from our stash.

Day one, January first, and I successfully prepared all my meals at home. I slept in a little bit this morning, but fixed breakfast for both of us around 9:30. Steven had a couple of eggs with an English muffin and I decided to have guacamole on my English muffin and some blueberries with cottage cheese. At lunchtime, I made a batch of cheese spread and then used some of it for a sandwich. It would have been pimiento cheese, but I didn't have pimientos on hand. I served this with a green salad, the mandarin orange, and a caffeine-free Diet Coke. Supper was as close to a traditional New Year's Day menu as possible. Country ribs cooked in the Instant Pot with barbecue sauce, field peas, mustard greens, and cornbread with Hatch chilies. I topped it all off with a glass of iced tea.

In addition to the meals I prepared, I made four “cans” of condensed cream of chicken soup from the last quart of chicken broth I had made from last week's rotisserie chicken.

My meals were made from mostly pantry items. The English muffins have been in the refrigerator for over a week as have the cottage cheese and blueberries. I used up the remaining ¾ of a block of cream cheese and just over a cup of cheddar cheese in the cheese spread. I must confess that I bought the country ribs over the weekend, and picked up the mustard greens and a cornbread mix yesterday evening. The field peas came from the freezer, though. I bought a bushel of peas back in August and shelled, blanched, and threw them into the freezer. And, the Hatch chilies were also from the freezer. I bought a large box of chilies last summer and roasted them and stored most in the freezer.

The package of ribs was enough for at least two meals. So, I cooked about half of them tonight and the remainder went into the freezer for a meal at at later time. Half of the cornbread from tonight's supper is going to be a #nextover tomorrow as dressing to go with left-over turkey. Tonight I pulled a package of turkey and a pint of chicken broth from the freezer and set them into the fridge overnight to thaw.