Today was pick-up day for my order from Bountiful Baskets Co-op. The directors like to say that we're not buying from the co-op, but that we're “contributing” to a consolidated order for produce and then receiving a share from the order. Whatever! This week I requested a conventional basket which is expected to be 12 or so different items, half fruit and half veggies. My contribution for one share (aka one “basket”) is $18.00 and the value of the produce usually comes up to $25.00 or more when priced at the local grocery stores. I also requested a Stew Pack which cost only $12.80 and was expected to contain the usual items you'd use in a big pot of soup—or two—or three.

Note that I don't know in advance what is going to be in the basket or how much. That's part of the fun. When something interesting shows up, I get to research how to use it and what dishes can be made. 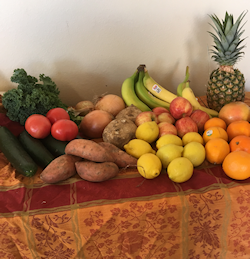 Look at all that yummy goodness in the conventional basket. There's so much fruit there; more than two senior citizens can consume in a week or even two. And, given that I already have a full fruit drawer due to hubby bringing home a huge bag of mandarin oranges, I simply don't have room to store it. So, I'm going to be sharing with my daughter and perhaps a friend.

There were eleven bananas. Eleven! We already had three on hand, so thet's more than we can use before they're too ripe. After Jaime takes what she wants, I'll wait for them to get overripe so I can make banana bread. Hubby likes it and it will make for good breakfasts. Whattever doesn't go into banana bread can be tossed into the freezer for later use in banana bread or muffins. And, I guess they could go into smoothies, though we rarely drink smoothies.

The rest of the fruit consisted of seven small navel oranges, seven small apples (probably Gala), two grapefruit, a pineapple, and eight lemons. I guess I'm going to have to juice the lemons and freeze the juice.

And now we come to the veggies. Four small sweet potatoes will show up in meals either baked or as fries. Three tomatoes and four cucumbers will make for very tasty salads over the next week. The onions (three of them) are always good to have on hand. I'm also glad to get a large bunch of kale since I love it a lot—not raw or in salads, but steamed, sauteed, and in soups. And the “interesting” veggie this week was jicama. We often have veggies with ranch dip or hummus, though it's usually just carrots and celery. I'll add jicama strips and enjoy every bite. And, researching jicama online, I find that it works well in stir-fry. Given the ½ head of cabbage sitting in the veggie drawer, I'm thinking about a lovely stir-fry for supper tomorrow. 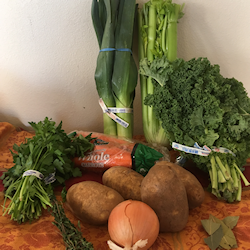 The stew pack contained a single onion, four potatoes, a pound of carrots, and a head of celery. All ingredients that I expected, though not necessarily in the amounts I hoped for. Also in the pack were three large leeks, a bunch of kale, a bunch of Italian flat-leaf parsley, and small packages of fresh thyme and bay leaves.

Leeks! What a surprise. I'm anticipating making a pot of Leek-y Potato Soup. I could have hoped for more potatoes, but when I run out, they are easy to get and inexpensive to boot. Potatoes plus kale leads me to think about a knock-off of the Olive Garden Zuppa Toscano. Of course, that's not terribly different from potato soup with leeks, so maybe not. Carrots, potatoes, celery, onion, and parsley would go well with some hamburger and tomatoes and maybe some other veggies from the freezer to make a hearty vegetable soup. Time will tell...

I had to get up and out early this morning to go pick up produce from the Bountiful Baskets Co-op. I live about ½ hour from the pick-up location, so I was out of the house shortly before 8 am. See my earlier post for the details of what was in my share. By the time I got back home, I was ready to eat breakfast, so I broke out a cup of strawberry yogurt. It wasn't much, but it was better than skipping breakfast again. 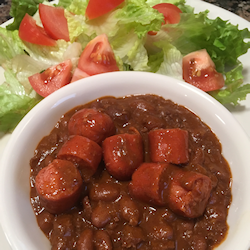 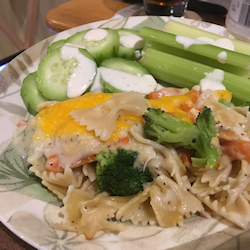 I did much better at lunch time. Steven had gone to the grocery and brought home a package of beef frankfurters. So, I broke open the package and opened a can of our favorite Armour Chili with Beans. Warmed the franks and chili in the same pan. While that was cooking, I made a salad with the last of the lettuce and ½ of a tomato. Topped it with ranch dressing and served the whole thing with a tall glass of iced tea.

Supper was a simple pasta dish made with bow tie pasta, broccoli, baby carrots, chicken breast, chicken broth, and a “can” of homemade condensed cream of chicken soup. Topped it off with ½ a cup of shredded cheddar and put it into the oven until it was bubbling. Sliced some cucumber and grabbed some celery sticks and topped them with a little bit of ranch dressing.

Well, today's meals were a mixture of what had been on hand before 1 January and newly purchased food. My breakfast was a carton of yogurt from the half dozen in the fridge. Lunch's chili was a can that has been in the pantry for a couple of months and the lettuce and tomatoes from the fridge. One thing that there's quite a bit of in the pantry is pasta, so I'm going to have to come up with several ways to eat this down. I took a chicken breast from the freezer and simmered it in the other half of the chicken broth that I used two nights ago to make the cornbread dressing. I used half of a bag of frozen broccoli and the last of the baby carrots from the fridge in addition to one of the cans of condensed chicken soup that I had made around Christmas. The cucumber and celery were the remnants of a shopping trip between Christmas and New Year's Day, but as you may have noticed, I got more of both in my Bountiful Baskets share this week.