I'm on vacation today and was looking over the various memes for Fridays at The Daily Meme and found Skywatch Friday. The "meme" here is that participants post a photo of the sky on a Friday. It couldn't get any easier. So, this made me think of the pictures I took out of the airplane window last week. 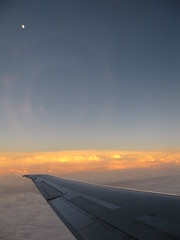 October 29, 2009. Somewhere between Philadelphia and Dallas. This was the 8th of 18 photos I took through the window during the flight. I took the first couple of photos shortly after takeoff, looking down onto the fluffy and bright white clouds. Then, about 2 hours later I noticed that the clouds were taking on brilliant orange and pink colors at sunset and a 3/4-full moon was hanging up in the darkening blue sky. It was a scene that was changing by the minute and although all I had with me was the little point-and-shoot that stays in my backpack, I was pleased that I got several very nice images.

I'm actually quite prone to pull out my camera when I'm sitting by the window. I find it nearly impossible to recognize any landmarks—well maybe I could figure out if I was looking down into the Grand Canyon—but that's not even important. I just find the landscape with its patchwork-quilt appearance if you're anywhere east of Colorado terribly interesting. And even when there's nearly complete cloud cover, it's still intriguing to look at the fluff below. Sometimes there are "seams" or rifts running straight through the clouds. I haven't been able to find out whether these are naturally occurring or if they've been cut by the passage of an airplane through the cloudbank.

At any rate, this is just another situation where the kids would moan, "Oh Mom" in exasperation as I pull out the camera to take a picture of something they think is just trivial and not worth recording in film (or digital image).