Today was all about traveling. I"m working in San Francisco on Tuesday through Thursday, so today was the travel day; flying from Dallas-Fort Worth to San Francisco and getting checked in to my hotel.

The day started around 6am when I woke up and started flinging clothes into my suitcase. I remembered that it was the first day of Week In The Life, so I took a picture of the weather station and clock in the family room.

We then loaded my luggage into the car, backed out of the garage, and I insisted that my hubby stop right there in the driveway so I could take a picture of the sunrise.

Unfortunately, this 7am departure meant that we were in traffic—the morning commute congestion—all the way to the airport. I took a bunch of photos of the traffic, but who wants to see those? Hubby dropped me off at the gate and I went inside to check-in and get through security. When I backed up from the self-service terminal to take a picture, I suddenly had to explain to the skeptical agent what I was doing and why.

After clearing security—with no photos to upset TSA security—I went to the Admiral's Club to get some breakfast and use the Wi-Fi network until time to head to my gate. Breakfast was a yogurt fruit parfait and a Diet Coke.

Unfortunately, fog in San Francisco was causing delays, so my 10:05 flight got rescheduled for 11:15. Fortunately, that gave me a lot more time to use the network. 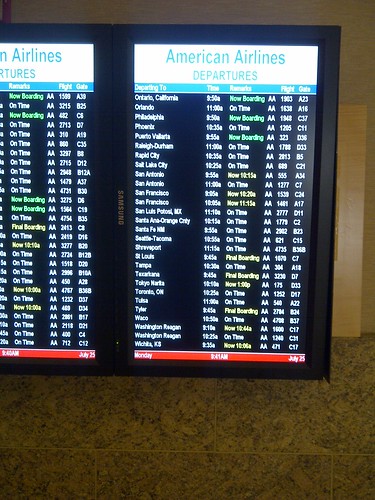 We boarded according to the new schedule and my window seat allowed me to take lots of pictures of the terrain that we were flying over.

I read, dozed, drank a Diet Pepsi and a tomato juice and other than a little bit of bumpiness for the last half of the flight, we landed at 12:28 (Pacific) with no fuss or bother at all. Gathered my suitcase at baggage claim, got a taxi and by 14:00, I was checking into the hotel.

After connecting to the Internet and checking both personal and work status, I headed across the street from the hotel to Naan 'N' Curry to get the lunch buffet.

After lunch, I returned to the hotel room, used the Internet, read for a while and then turned on the TV to provide some noise while I worked on today's photos, including figuring out how to get full-sized photos off of the Blackberry without tethering it to my laptop. Hooray for Flickr.

Well, I'm on page 206 of 453 in Predator by Patricia Cornwell. I'm going to mute the TV, crawl into the bed, and read until I fall asleep. Tomorrow is another day!