Two down, five to go in the 2011 Week In The Life Project organized by Ali Edwards. Yesterday, I took around 140 photos and as of 18:30 today, I had only taken 17 snapshots. So, when it was time to leave the office, I set myself the task of taking a few more pictures to finish out the day.

Having flown from Texas to California yesterday, my body was two hours off the clock, so after heading to bed at 11:30 last night, I woke up at 4:34 this morning. I grinned, turned over and went back to sleep. Woke again at 5:37 and then again at 6:05, at which time I decided to get out of the bed. I quickly got dressed and sat down at my computer to start organizing my day. I took a look out the window and was surprised at how foggy it was. This was a dramatic contrast to the view when I checked into my hotel room yesterday. 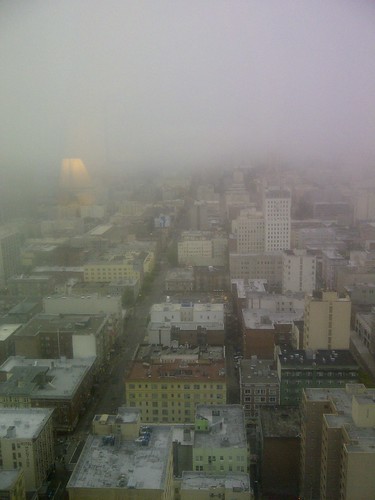 As I left the room to get some breakfast, I took a photo of the alarm clock on the bedside table.

After eating, it was time to catch a taxi to the office where I was issued an electronic card to get into the elevator bays. Getting off the elevator on the 20th floor, I was greeted by a sign giving the location of the workshop that I'm helping lead this week.

Following those directions, I checked out the classroom:

Mid-morning, I trekked down to the 19th floor to find a vending machine so I could have another Diet Coke. I then filled a plate with some fresh fruit and a small muffin—a substantial morning snack.

It was a very busy day. While my colleague was giving today's lectures, I was working away at my laptop building the lab environment for the SHARE technical conference which will be held in two weeks in Orlando. I knew I wouldn't find many things to take pictures of, but I asked a co-worker to take some pictures of me over the next couple of days.

Periodically, I'd check the forums at Big Picture Classes to see what others were saying about their experiences with the Week In The Life project. And, my cell phone kept ringing with wrong numbers. Apparently, there's a hotel or resort whose number is similar to mine because I keep getting asked if I have any rooms available!

We finally got away from the office around 18:45. I slipped into the restroom to take a picture in the big mirror.

... and then descended to the street to find a taxi to take me back to the hotel.

(Okay—I can see that I was getting a little bit desperate for a photo when I resorted to taking a picture of the buttons in the elevator!) But with that out of my system, the taxi ride back to the hotel went without a hitch. I walked ½ block from the hotel to Lori's Diner, where I ordered the Cadillac Burger with Sweet Potato Fries.

I stopped in at a convenience store on the way back to the hotel and picked up a bottle of Diet Pepsi to get me through the evening.

And now, it's nearly midnight and time for me to get to bed. 6 am is going to come awfully early tomorrow!